Check out the latest news and events.

Youth Media and Health Institute 2015 Comes to an End

Posted by Morgan Lee on 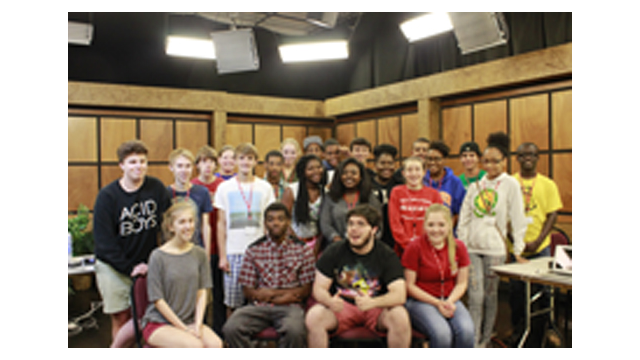 Take a look at the students who participated in the YMHI 2015!
Joseph Biggs

As you know from my posts last week, the American Graduate team here at SCETV held a Youth Media and Health Institute for 23 talented high school and college students! It was such an amazing week for the students, and for me as an intern! Last time I blogged, I told you all about how the students had gone to different farms around the state on Tuesday and gathered footage for their 5 minute documentaries they were making on the importance of farms and eating organic! Well the rest of the weeks for the students was filled with editing and piecing together their footage to make their documentary really something great!

For the remainder of Wednesday, and most of the day Thursday and Friday, the students split into groups of two and started putting together their documentaries! At the beginning of the editing process the students went through all of their footage and chose what they wanted to use for their documentaries. This took quite a bit of time, considering most pairs had about an hours’ worth of footage, including the interview they conducted with farmers, and B roll to put behind the interview. After the Students did that, they began to piece together their shots in a cohesive manner, learning how to tell a story with the footage they acquired. This took a little while for the students to figure out, but with a little coaching from the instructors of the institute, the students got the hang of it, and produced some really wonderful work!

Not only did the students learn how to use media equipment, but they also learned a very important lesson that everyone in the field of media has to learn at some point: deadlines will be the death of you. It’s not a fun lesson to learn, but a necessary one. In my very brief time as a journalism student, I would have to say that is the very first lesson I learned when it came to creative work. Everyone wishes they had all the time in the world to make their project absolutely flawless...but sadly it doesn’t work that way! On Thursday, the instructors announced that the rough cut of the students' videos would be shown in front of the rest of the group at 2:30. As soon as the announcement was made, you could tell that they were internally freaking out. But when it came time to present the rough cuts, everyone was nothing but impressed with what the students created!

With presenting their rough cuts, the students also learned another valuable lesson that everyone who takes a job in the media department eventually learns. When you create something, whether it’s a written story, a photograph, a design, and in the case of the students, a video, you have to be willing to take critique from those around you! When the rough cuts were shown, the instructors gave some suggestions as to things they would change, add, or take away, and the students took these critiques and changed their videos accordingly, really making the finished projects on Friday amazing!

The students spent the remainder of their time on Thursday and Friday finishing up their videos, and then on Friday night, SCETV and American Graduate put on a dinner and showing of the students videos for their families and friends! It was a wonderful night, and you could tell how excited the students were about showing off all the hard work they had put into the week!

This week was absolutely amazing for me to assist with! I love seeing talented and intelligent students acquire such a passion for media and journalism. American Graduate gave these students a chance to explore a future career path, and you could really tell that this institution really lit a fire in some of these kids heart for journalism and creative work. It’s wonderful to see that!

I can’t wait to see what these students accomplish in the future! Im sure they will achieve nothing but greatness!

Until Next Time American Graduate Supporters